4 Things I Love About Tangled 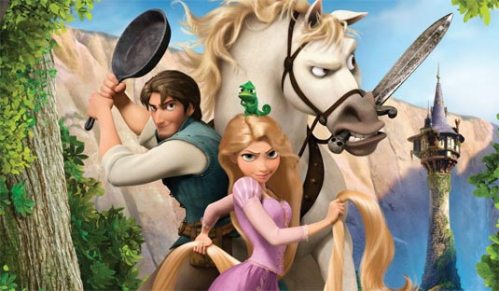 So, thanks to the crack that is Netflix Instant, I have become addicted to Tangled (2010), one of Disney’s more recent products.  I didn’t get to see it in theaters (we saw 127 Hours instead, during which my father and I both fainted – true story), but I have watched it roughly every two weeks since discovering it in August.  Here are just a few reasons I love it so:

1) It’s the most feminist Disney film yet

There has been endless debate over the past twenty years about the messages Disney princesses and their associated stories are sending to young girls.  Tangled, I am happy to say, creates a heroine who sends no mixed messages.  Rapunzel is far from a victim – although she has been shut up in her tower her whole life, she does not just sit around and brush her hair like her fairy tale alter ego.  Instead, we get a whole song about all the creative, productive things she does with her time.  The most notable of her hobbies is her artwork; over the course of her life, she has turned the tower into one giant mural, filled with her dreams and impressions.  Rapunzel has made the best of her situation and actually used it to develop an inner life for herself and a sense of what she wants from the outside world.

On top of her developed sense of self, this Rapunzel is a gosh-darn action heroine!  She is the one who consistently saves the day, using her hair in resourceful ways to rescue the rather incompetent Flynn Rider.  Then, when the big reveals come around, she figures them out all by herself!  It seems like a silly thing to be happy about, but most movies would have had Flynn reveal her parentage to her as she broke down in tears.  Instead, she has a moment of clarity and figures out her own origins without any help.

Finally, the movie does not rely on her beauty or sex appeal in any way.  She is only objectified once, the first time Flynn sees her, and he quickly learns that treating her as a sex object will not get him anywhere.  The girl does not put up with his lothario silliness.  In the end, when he (SPOILER ALERT) cuts her hair, she is only sad at the loss of her power, not for her loss of conventional beauty.  In Tangled, Disney gives us a heroine who values herself for her mind and abilities, not her looks.

2) The songs are incredibly catchy

The songs in Tangled feature music by the brilliant Alan Menken.  Yes, there will never be lyrics that measure up to those of the great Howard Ashman (RIP), but his writing partner serves up some lovely tunes here, and the lyrics by Glenn Slater are the best Disney’s had in a while.

I was never really into Mandy Moore back when she was a pop star.  Yes, I watched A Walk to Remember and cried with the rest of my generation, but it was her satirical, wicked turn in Saved! (2004) that won me over.  Her voice lends Rapunzel the perfect combination of spunk and innocent sweetness, and you gotta love her adorably pure singing voice.

This totally blew me away the first time I watched the movie, and I have been known to shed a few tears from time to time.  The scene has emotional power, beautiful animation, and lovely metaphorical imagery.  When the light of the lanterns winds down the castle hill, it instantly recalls Rapunzel’s glowing hair – that’s well-thought-out animation for you.  Plus, have I mentioned it looks gorgeous?  I mean, come on: 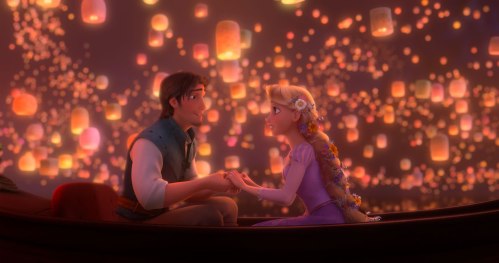 It’s also paired with a lovely, Oscar-nominated ballad.  Gets me every time.

Ok, that’s it for now.  I could seriously go on about this film all day.  It has its problems (why does the guy get the power of narration if it’s Rapunzel’s story?), but its gorgeous animation and delightful spirit keep me watching again and again.