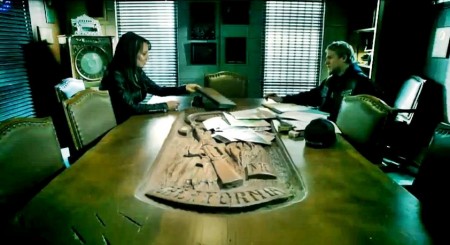 I haven’t made a practice of doing single episode reviews, but last night’s episode of Sons of Anarchy was so fantastic I just had to write about it.  “To Be, Act One” was the first half of the season four finale, and man did it bring everything full circle.

Written by showrunner Kurt Sutter and Chris Collins, the episode is largely made up of two-person scenes. We have Jax and Tara, then Gemma and Tara, then Jax and Gemma, the tension building in each confrontation, until the three of them finally come together to hash it out.  The elegance of this structure does a lot to streamline the story and hone in on the relationships between these three characters, and all three actors do an amazing job.

In the end, Tara emerges as the real power player, having surpassed Gemma in both machinations and possessiveness.  When she says to Jax and Gemma in turn, “Tell me you love me,” it is more of a challenge than a plea.  Maggie Siff has been phenomenal this season, and we can feel the rage emanating off of Tara throughout the episode.  When she pulls out a syringe and details her plan to kill Clay, the look on Katey Sagal’s face is fantastic – she’s looking at Tara like she’s never seen her before.  Indeed, we are seeing a whole new Tara here.  Her eyes have become cold and empty.  When she tells Gemma, “[I’m doing] Everything you taught me….He’s MINE,” we can only join Gemma in gaping at the monster she has created.

As a counterpoint to all the Jax-Tara-Gemma intrigue, we have Tig’s much simpler desire to rebuild his friendship with Clay.  When did Tig become the sweetest character on this show?!  His love for both Gemma and Clay is beautiful, and Kim Coates’s face is so wonderfully expressive.  When he goes to Clay’s bedside and apologizes, his “I love you” is the only emotional one in the episode.  It’s all the more heartbreaking because we know Clay doesn’t deserve Tig’s love.  This season is just cutting to the bone at every turn.

Finally, I loved how much “To Be, Act One” brought us back to the pilot.  Gemma looks at pictures from the same “John misc.” box where Jax found JT’s manuscript in the first place.  Jax is just as hopeful and misguided now as he was then, but the stakes are even higher.  Then, in the most chilling echo, when Tara pulls out that syringe, we are reminded of when Gemma gave Wendy a needle to OD with.  Tara has become what she never wanted to be: Gemma 2.0.

“To Be, Act One” was an amazing episode all around.  I can’t wait for “To Be, Act Two.”  What am I going to do without Sons of Anarchy in the spring?!

Favorite comedic moments:  The image of the prospect sitting at Jax’s kitchen table eating cereal from a salad bowl was just marvelous.  Then, in the next scene, he was feeding the baby!  I think he’s the new Half-Sack.